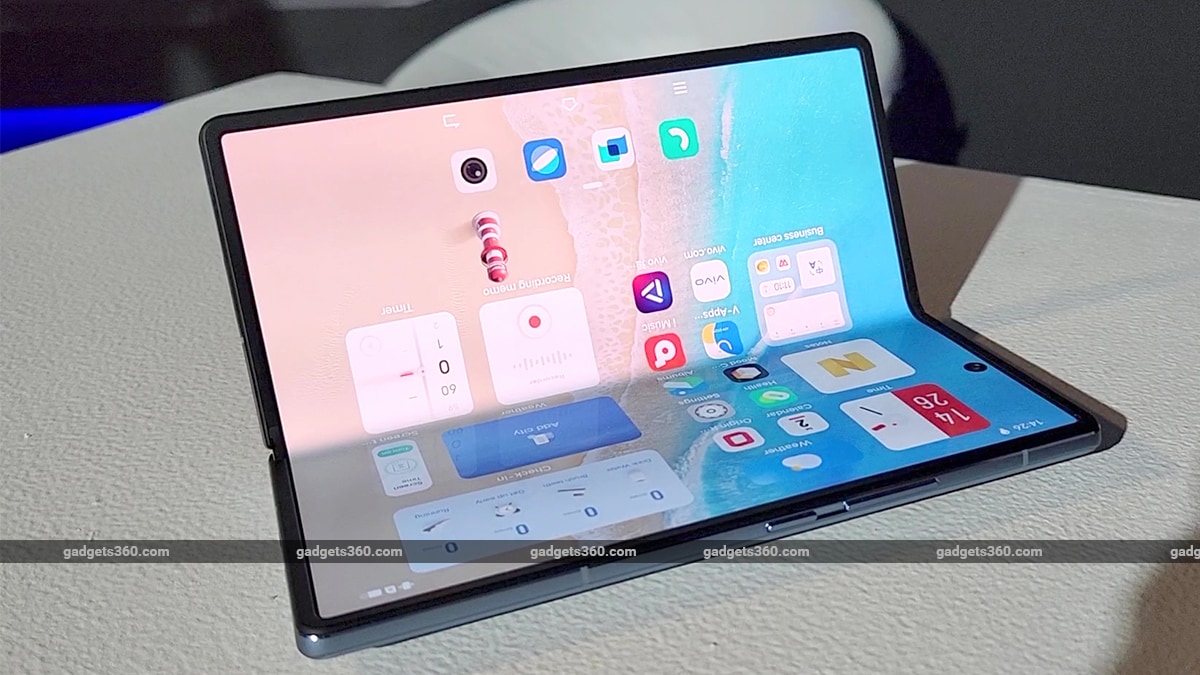 With the X Fold, Vivo has made its debut in the foldable smartphone segment. The phone was released in April 2022 solely for the Chinese market at a price of CNY 8,999 (about Rs. 1,02,600). If we directly compare this pricing to the foldable options in India such as the Samsung Galaxy Z Fold 4 (Review), the X Fold definitely has a more tempting price. Sadly, as of now, Vivo doesn’t have any plans of launching the X Fold in India, but considering the sizeable market share it enjoys in our country and the fact that it does sell high-end phones such as the Vivo X80 Pro (Review), the X Fold could be an interesting addition to its premium smartphone portfolio here.

We did get to spend some time with the Vivo X Fold at the company’s first Tech Day event in New Delhi, where Vivo talked about its partnership with Jio for 5G, its smartphone camera innovations, and more.

The Vivo X Fold looks like the X80 Pro at first glance, at least from the back. The resemblance is uncanny, with the circular glass camera housing and Zeiss branding. However, it’s a completely different story when you look at the sides of the X Fold, which is when you realise it’s a foldable smartphone. But, before we get into the details, one thing that stood out to me was how slim this foldable smartphone is. The Vivo X Fold can easily be mistaken for a regular non-folding smartphone.

Starting with the back panel of the Vivo X Fold, you get a leather-finish along with the rear cameras and the Zeiss branding. The Vivo branding is at the bottom-half of the back panel, which is similar to what we’ve seen in the brand’s X-series smartphones. The back panel does not attract fingerprints, but I found the leather material to be overly soft and it could get easily scuffed with everyday use.

The right side of the Vivo X Fold features an alert slider, as seen on OnePlus phones, and the left side has the power and volume keys. The phone has a heft to it as it weighs 311g, and feels a lot heavier compared to my daily driver, the Samsung Galaxy Z Fold 4. The X Fold is the first foldable smartphone that I’ve seen with an in-display fingerprint sensor for both the cover display and the inner foldable display. The phone does feel very premium when you hold it.

The cover display of the Vivo X Fold itself is enormous, and it can be used as a regular smartphone without needing to unfold the main display. The main foldable screen is larger than the one in the Galaxy Fold 4, so viewing movies or multitasking in general should be fantastic. One thing to keep in mind is that the Vivo X Fold still cannot be used with one hand comfortably, mainly because of its larger-than-usual dimensions.

The Vivo X Fold gets a massive 8.03-inch folding display

The flagship Vivo X Fold, according to the company, is the result of 150 technological patents. It aims to eliminates the most common customer complaint about a folding phone: the crease. In my opinion, the crease is barely visible and the phone folds completely flush, leaving no gaps in between the two halves, unlike the Samsung Galaxy Z Fold 4. Vivo seems to have learned from the experiences of other companies and user feedback about foldable phones.

Vivo also boasts about the unibody structure of the hinge in the X Fold and claims that six aerospace-grade materials are used in the construction of the phone. The Vivo X Fold has matte-finished sides, including the hinge, that’s made from aluminium. This ensures the phone doesn’t pick up fingerprints easily. The Type-C charging connector, speaker grille, SIM slot, and noise cancellation microphones are all located on the bottom of the Vivo X Fold. Another speaker grill and two noise-cancellation microphones are located on the top.

Talking about the cameras on the Vivo X Fold, the rear gets a 50-megapixel Samsung GN5 main sensor, a 48-megapixel ultra-wide-angle camera, a 12-megapixel portrait camera (2X optical zoom), and a 5-megapixel periscopic-style telephoto camera with a 5X optical zoom and up to 60X digital zoom. This camera setup comes equipped with the Zeiss T* coating for the lenses. For selfies, there are 16-megapixel cameras in the cover screen and the foldable display.

The Vivo X Fold is powered by a Qualcomm Snapdragon 8 Gen 1 SoC, and runs on Android 12 with Vivo’s OriginOS Ocean (not Funtouch OS) skin. It comes equipped with a 4,600mAh battery that claims to be able to charge fully in just 37 minutes owing to the 66W wired charging. It can also charge wirelessly at 50W and supports reverse wireless charging at 10W.

Despite the X Fold being Vivo’s first-generation foldable phone, it is a well-crafted piece of technology that seems very sophisticated. Most of the big concerns that come with a foldable smartphone seem to be addressed here such as the cameras, hinge mechanism, and a premium appearance and feel. While Vivo has no plans as of now to launch the X Fold in India, it would be fantastic if it did as it would mean more choices for the consumer, which is always a good thing.

Affiliate links may be automatically generated – see our ethics statement for details.