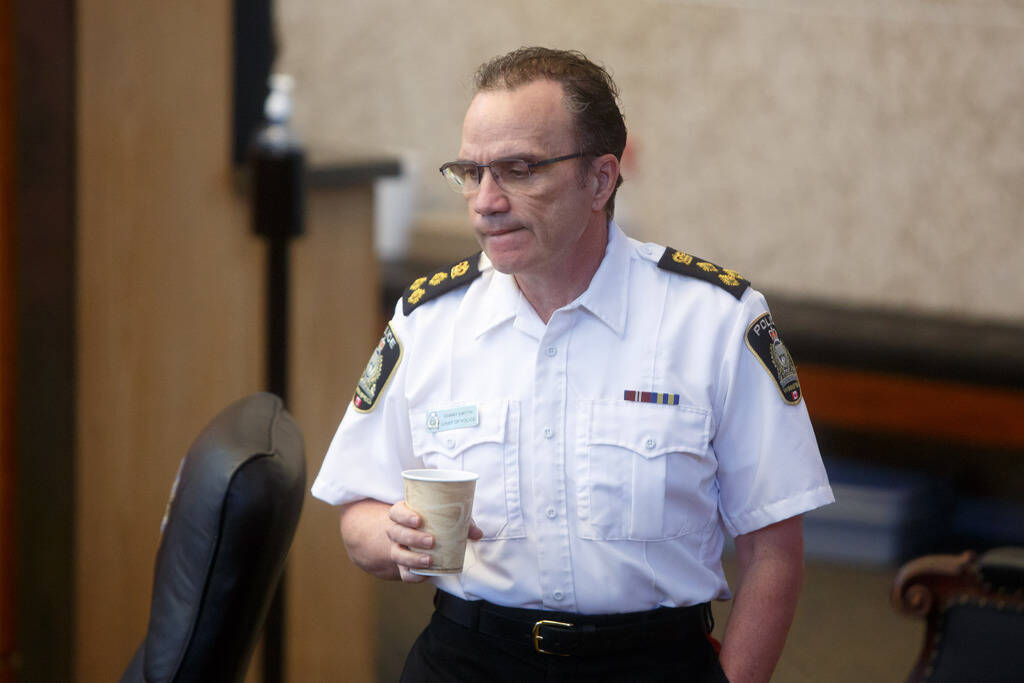 A suspect was apprehended by former officers following a brief foot chase.

Wearing his police uniform, Chief Danny Smyth was sitting at a VIP table with other dignitaries when a man approached and “dumped” a pitcher of water over his head, said Les Kojima, the pavilion’s co-ordinator.

“The chief was unhurt physically, but he was wet,” Kojima told the Free Press on Tuesday. “Everybody was eating and talking, and the drummers were performing, I think.

“I don’t know what this guy’s story was, but he decided to do that (to Smyth).”

“I don’t know what this guy’s story was, but he decided to do that (to Smyth).” – Les Kojima

Smyth was among the VIPs introduced to the audience before the incident, which happened at about 9 p.m. inside Petrus Hall on Inkster Boulevard, just east of Brookside Boulevard, in the Tyndall Park area.

The man was released on an undertaking.

Police did not disclose details of the assault.

“The Winnipeg Police Service can confirm an incident took place involving Chief Danny Smyth,” Chancy wrote in an email. “He was representing the service at a community event at a Folklorama pavilion.

“As this is before the courts, we have no further information or comment at this time.”

Smyth has not commented.

Kojima was in the hall at the time, but he didn’t witness the incident.

“There was a lot of commotion and somebody was yelling, ‘Stop that guy,’” said Kojima. “Guests and volunteers chased him.”

A security guard, who is a former police officer, got into his vehicle and caught up with the suspect as he ran east along Inkster.

A second guard, also an ex-officer, helped to apprehend the man and hold him until police arrived to arrest him.

“We apprehended the individual and subdued him,” said Kojima. “He was kept inside a former officer’s vehicle. The situation was under control before police arrived.”

A witness, who volunteers at the pavilion, said the man was apprehended after he tripped and fell while running.

“The (suspect) ran by first, and everyone was chasing him,” she said. “He ran out the door and ran away.”

Kojima described the incident as “embarrassing” for the pavilion, which is hosted by the Japanese Cultural Association of Manitoba.

“It could have been so much worse. (The suspect) could have had a knife,” he said.

“It could have been so much worse. (The suspect) could have had a knife.” – Les Kojima

When Kojima spoke to Smyth afterward, the chief told him he didn’t know the suspect.

“(Smyth) was fine and calm. He took it in stride,” said Kojima.

The suspect is not known to pavilion volunteers.

“He was a paying customer, as far as I know,” said Kojima.

He didn’t notice any security with Smyth, who visited the pavilion as part of a tour with Folklorama’s president. The St. Peter’s Roman Catholic Church multi-purpose hall seats hundreds of spectators. Kojima said there are no plans to make any changes to security at the pavilion.

Guards are on hand for every show during the pavilion’s seven-day run.

“I think we handled (the incident) quite well,”said Kojima.

City Coun. Markus Chambers, who chairs the Winnipeg Police Board, said Smyth called him Tuesday to notify him and give him some background on what happened.

“He stated an individual poured a pitcher of water over his head,” said Chambers.

The chief told him the suspect fled the scene but was “scooped up” by a pair of retired police officers close to the venue.

“He was sitting at the (Folklorama) president’s table when the assault occurred,” said Chambers.

Smyth sounded “shocked and disappointed” by what happened, according to the councillor for St. Norbert-Seine River, who isn’t aware of a motive for the incident.

“For somebody to react or treat him in this manner, it is totally unexpected and truly disappointing,” said Chambers.

He has never heard of a Winnipeg police chief being assaulted by a member of the public.

Chambers said the fact it was a pitcher of water does not make the assault any less serious than if it involved a punch or a typical weapon.

Politicians and other dignitaries are fixtures at Folklorama pavilions, a longtime annual cultural festival which began Sunday and runs until Aug. 13.

“It’s a lack of respect for people who are in these roles,” Chambers said. “We’re attending these events often with family or in an official capacity.”

“It’s a lack of respect for people who are in these roles… We’re attending these events often with family or in an official capacity.” – City Coun. Markus Chambers

Someone threw eggs at Chambers’ house while he was attending his son’s wedding over the August long weekend.

“It shows you the lack of respect people have,” the councillor said.

Chambers said anyone who has any “issues” with policing in Winnipeg can take them up with the police board he chairs.

A spokesperson for Brian Bowman said the mayor was not aware of the incident as of Tuesday afternoon and was unable to comment.

As a general assignment reporter, Chris covers a little bit of everything for the Free Press.