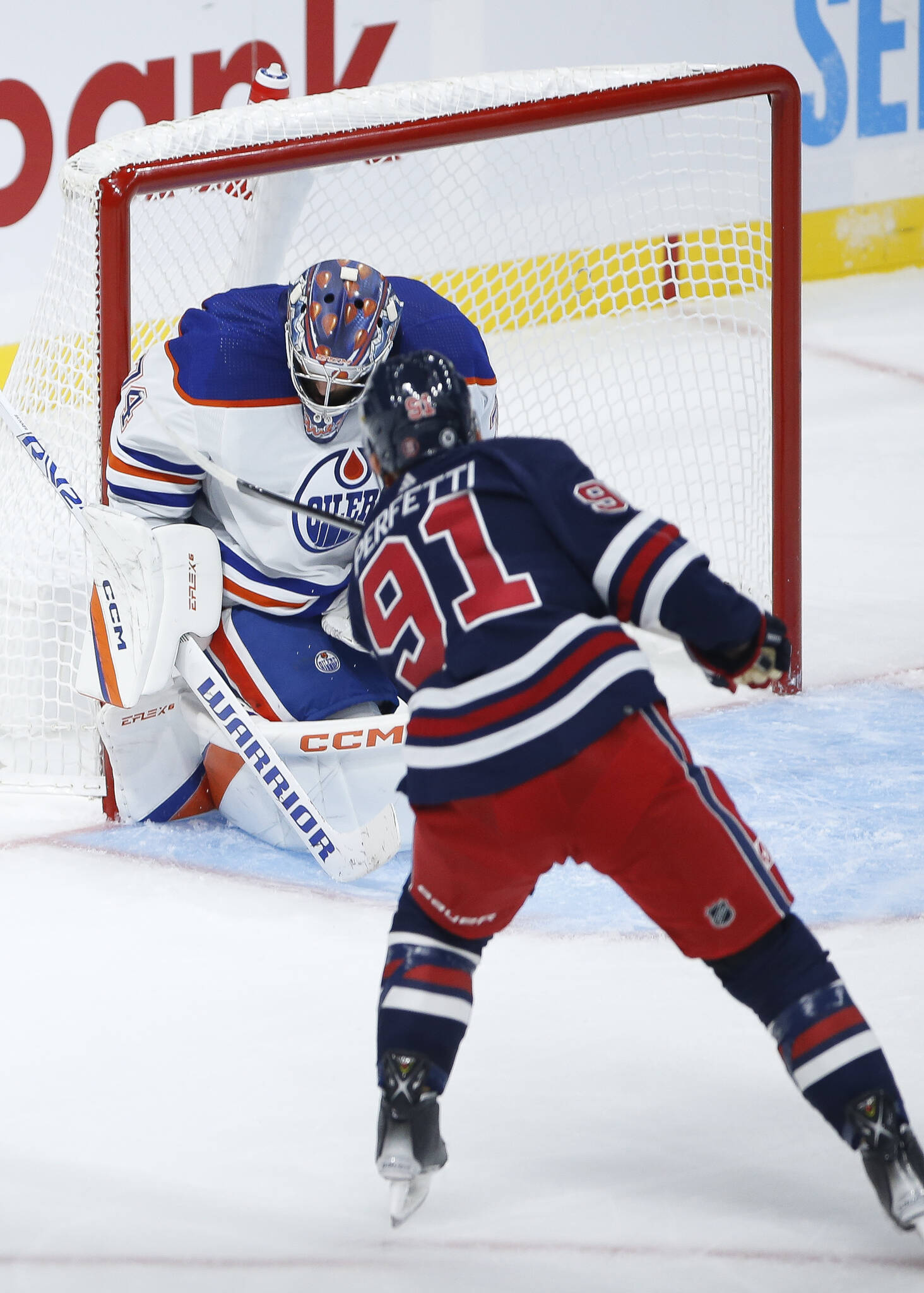 With just a week remaining in training camp, Cole Perfetti has certainly made a strong impression.

The Winnipeg Jets young forward, at just 20 years old, has played in three of his team’s four preseason games so far, registering three points, including a pair of goals in a 3-2 shootout loss to the Edmonton Oilers on Saturday. He’s been slotted in on the left wing on a line with centre Pierre-Luc Dubois and winger Blake Wheeler, a trio expected be leaned on heavily when the regular season starts against the New York Rangers on Oct. 14.

Perfetti has liked his effort at camp and appreciates being grouped with a pair of veterans, which has only helped with his confidence. But with plenty of time between now and the start of a new season, he isn’t taking anything for granted.

“I still got to go make the team. In my mind, I’m doing whatever I can to prepare to be on this team,” Perfetti said after another up-tempo workout Sunday at the Jets training facility. “It’s a brand new staff, brand new systems, brand new everything. I only played 18 games last year, it’s not like I played the full season. I do feel really comfortable, I do feel happy with where I’m at, but at the same time, there are no guarantees in life, no guarantees in pro hockey.”

Perfetti played 18 games for the Jets over the 2021-22 campaign, finishing with two goals and five assists while playing up and down the lineup. He had his season cut short in mid-February after suffering a shoulder injury following a heavy hit by Seattle Kraken defenceman Jamie Oleksiak.

He had already been playing with a nagging back injury, which only got worse while rehabbing his shoulder, setting him back in his recovery. It was Perfetti’s first serious injury playing the game he loves, which made him admittedly a bit scared and then nervous for a return.

Fully recovered now, he looks no worse for wear, and is back to showcasing his playmaking abilities at camp. There will be some growing pains, to be sure, especially as Perfetti, who is listed generously at 5-foot-11 and 177 pounds, continues to grow into his body and gets more reps at the game’s top level.

“He’s a great player; everybody knows that,” Jets forward Nikolaj Ehlers said. “So, it’s just a matter of him getting more and more comfortable and making the right reads and all that, but I think everybody knows that comes. He’s a young guy.” Ehlers noted the jump from junior hockey – Perfetti starred for the OHL’s Saginaw Spirit, scoring 111 points (37G, 74A) in his final season – isn’t an easy one and what you bring to the table doesn’t always translate to the NHL level. He added that he went through a similar process when he first started playing in the NHL, after dominating with the QMJHL’s Halifax Mooseheads.

The best advice Ehlers had for Perfetti was to listen to the older players on the team and just be eager to learn, a trait he said Perfetti already possesses. Ehlers also spent hours going over his games, trying to pinpoint areas where he could improve and mistakes he could correct.

“He’s a smart guy, he’s a great player and he’s shown that already,” Ehlers said. “So, time will only help him.” Jets head coach Rick Bowness has liked what he’s seen from the 2020 first-round (10th overall) pick. He also appreciated Perfetti’s level of humility and understanding that he’s got to work for everything he gets, adding: “If you’re thinking you’ve got spots on this team, that would be your mistake.”

“As I told him today, on the ice, don’t worry about the details of the game, without the puck, we’ll teach you those. When you get the puck, man, do your thing. You’re creative, finding guys, hanging on to pucks and everything else, you keep doing those things,” Bowness added. “He’s a great kid, with a great attitude, and he wants to learn. I had a little video session with him last week and he was all eyes and all questions. I love that.”

With two more preseason games, Perfetti is expected to play at least once more, with a good chance of playing in both. Like much of the team after a disappointing season last year, he’s eager to prove he belongs and looks forward to building on what he’s done the last few weeks.

“I know I’m ready to make that jump and be a part of this and I’m really excited,” Perfetti said. “Hopefully everything goes to plan and I keep doing what I’m doing. But there’s still a team to make…it’s not set in stone.”

MORE MOVES: After trimming 16 players from the training camp roster on Saturday, the Jets announced Sunday they’ve reassigned goalie Arvid Holm to the Manitoba Moose. Holm, a Swedish netminder that was selected by Winnipeg in the sixth round of the 2017 NHL Draft, saw action in one preseason game, allowing two goals on 15 shots, both of which came while shorthanded. The 23-year-old is expected to get a lot of playing time with the Moose after dressing for 24 games last season, where he posted a 2.90 goals-against average and an .877 save percentage.

HAWERCHUK MAKES BID FOR MOOSE: The Moose announced their training camp roster on Sunday – a list that currently consists of 22 forwards, 12 defenceman and four goalies – and on it was the offspring of a former Jets superstar. Ben Hawerchuk, the son of Dale Hawerchuk, was one of 10 players to recently sign a tryout agreement. Ben Hawerchuk, 24, is coming off a five-game stint with Merano of the Alps Hockey League, in Italy, with stops as well in the ECHL and five years with the OHL’s Barrie Colts. Dale Hawerchuk was drafted first overall by Winnipeg in 1981 and spent nine seasons with the Jets. On Saturday, the Jets unveiled a statue of him to honour his legacy. Hawerchuk died from stomach cancer in August of 2020, at the age of 57.

After a slew of injuries playing hockey that included breaks to the wrist, arm, and collar bone; a tear of the medial collateral ligament in both knees; as well as a collapsed lung, Jeff figured it was a good idea to take his interest in sports off the ice and in to the classroom.