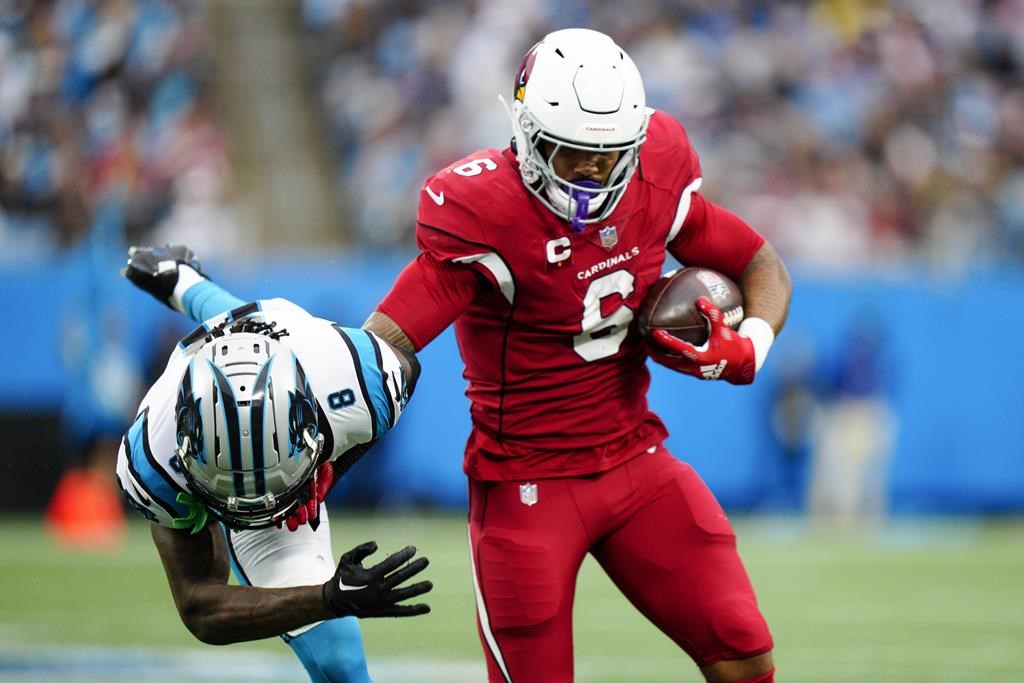 CHARLOTTE, N.C. (AP) — Kyler Murray threw for 207 yards and two touchdowns and added one rushing and the Arizona Cardinals overcame yet another lackluster first half to defeat the Carolina Panthers 26-16 on Sunday.

Murray threw TD passes of 23 yards to Marquise Brown and 2 yards to Zach Ertz and also ran for a 4-yard score and the Cardinals (2-2) held a 17-minute advantage in time of possession to beat the Panthers for the first time in the past seven meetings.

The Cardinals defense frustrated Baker Mayfield, forcing three turnovers by the 2018 No. 1 overall pick — prompting boos from the home crowd in the fourth quarter.

Mayfield struggled yet again for the Panthers (1-3).

The 6-foot-1 Mayfield had five passes batted at the line of scrimmage and repeatedly overthrew open receivers. He was pressured repeatedly as the Cardinals stole a page from previous Carolina opponents, flustering the former Heisman Trophy winner with a series of blitzes.

At one point Mayfield thrusted his arm in the air in frustration.

The Cardinals once again came out flat, falling behind 10-3 at halftime. They have been outscored 66-16 in the first half of four games.

But the Cards took their first lead in regulation this season with Matt Prater’s 39-yard field goal with 11:22 remaining.

Three-time NFL Defensive Player of the Year J.J. Watt, playing just four days after having his heart shocked into rhythm after going into atrial fibrillation, then deflected Mayfield’s pass and Markus Golden returned it to the Carolina 5.

Two plays later, Murray scored on a designed rollout for a 20-10 lead. Murray found Brown on a corner route to push the lead to 26-10.

The Panthers had won 14 of 19 overall against the Cardinals coming into the game, including the past six by an average margin of 35-17. But the Panthers were just 2 of 10 on third downs and couldn’t get anything going on offense.

Carolina’s only touchdown in the first 55 minutes of the game came when Frankie Luvu intercepted Murray’s pass and returned it 33 yards for a touchdown to give Carolina a 7-0 lead early in the second quarter.

Cardinals right guard Will Hernandez was ejected in the fourth quarter after pushing an official in the back following a dust-up between the two teams.

Cardinals: LG Justin Pugh (elbow) and LB Nick Vigil (hamstring) left the game in the first half and did not return. … Prater did not attempt an extra point late in the game because of a hip injury.

Panthers: Safety Jeremy Chinn left the game in the first quarter with a hamstring and did not return.